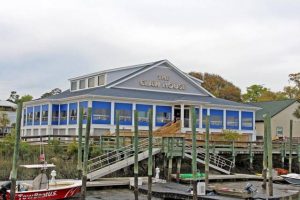 Murrells Inlet is known for it’s fresh, local seafood. Making it’s way down south and a newcomer to the Inlet scene is The Claw House. Located on the infamous MarshWalk, The Claw House is a New England style lobster house and raw bar, and with it’s location on the marsh in South Carolina, has added a dash of southern zest.

The interior of The Claw House is a beautiful wood-grain that imitates that of a ship. They even have a large aquarium filled with colorful sea life. Outside they have a huge deck that’s climate controlled, so dining on the waterfront can be enjoyed year round. But outdoors isn’t the only place you get a fantastic view of the water. They boast a view of the waterfront from every seat in the house!

The Claw House is known for its live North Atlantic lobster, which is delivered bi-weekly. Their menu is full of fresh seafood, steaks and burgers. And the food presentation is quite a sight in itself. When you order a combo of seafood off the Raw Bar menu that’s more than The Sampler, it comes in a two-story tower or triple-decker tiered plating arrangement!

With its horse-shaped oyster bar and great drink and food specials, it’s a nice place to gather for Happy Hour. On Tuesdays they host Twin Tail Trivia that include a deal on the price of two lobster tails. They even offer seasonal favorites such as local oysters. On Monday nights during the winter, they feature an All You Can Eat Oyster Roast. There’s nothing like shucking fresh, locally steamed oysters with friends.

So whether you’re grabbing a drink with a few friends or looking for a place for a date night, The Claw House in Murrells Inlet has you covered. Relax and unwind – all while enjoying a fantastic meal with a spectacular view of the marsh!

Sorry, the comment form is closed at this time.